Do you believe in love at first sight?

That’s the question posed in a new work by local playwright Cliff Gillies.

Cliff, an award winning actor and writer, is perhaps best known as the writer (and Dame) for The Atkinson’s All Souls pantomime. However, his new play couldn’t be more different from Aladdin, which finished its run at The Atkinson this week.

“First Sight” which is being performed the week after Valentine’s Day, follows Michael his big day as he prepares in the church’s anteroom. Michael receives a package containing love letters spanning the last twenty years and what unfolds will restore your faith in life, in hope and in love.
Chloe Hughes (who plays Helen) explains ” First Sight is a funny, poignant, emotional and life affirming play about love and life. It has moments that will make you laugh out loud but also has an deeply emotional element as we follow the love story through the years. It’s a play that will restore your faith in true love.”
Although the show is being performed by the award winning Too Friendly Theatre Company the production itself is being hosted by Ormskirk Theatre Company at their new venue, Upmarket Theatre.
Mark Haygarth, who also stars in the show, explains “The Upmarket Theatre is Ormskirk’s newest venue, built above the Market Cross in Church Street. It’s a fantastic small scale theatre and we’re excited to be one of the first few companies performing there”.

But that’s not all!

Two plays for the price of one.

The plays run from February 20th to 22nd.
Tickets are available online at www.ormskirktheatrecompany.co.uk, by calling 07757 416560 or in person at The Market Cross Bar.

Spaces are limited so we suggest you book early to avoid disappointment. 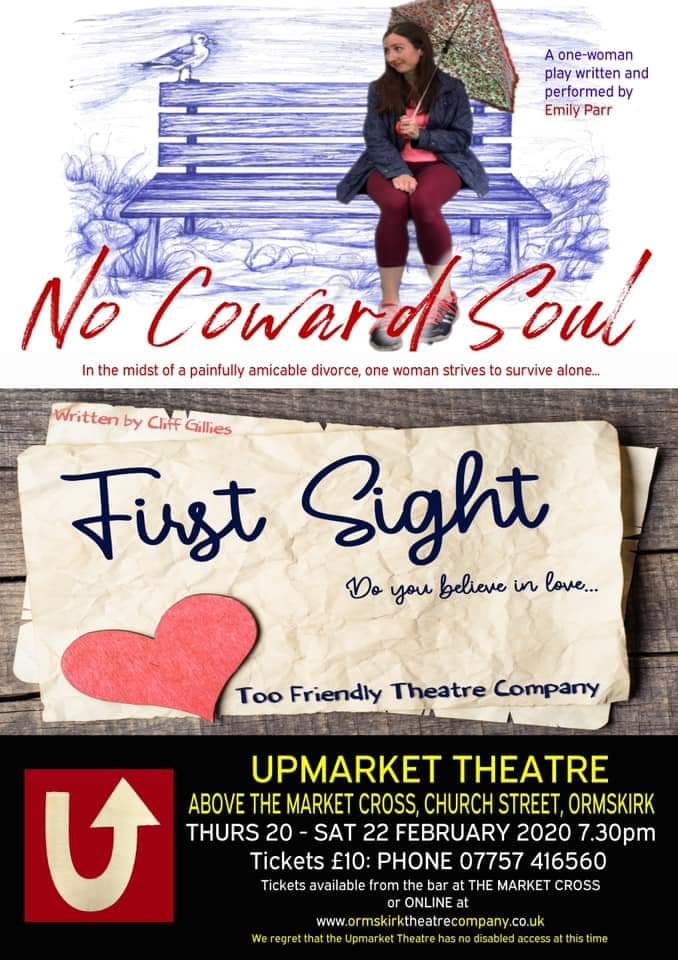 One thought on “Next Show”